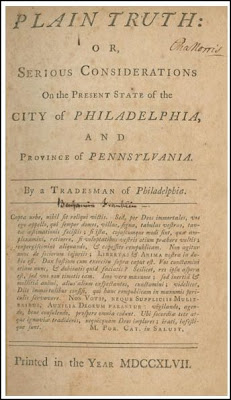 Nearly all of Franklin's printing and writing was undertaken for profit, but in the two months before his retirement in 1748, he devoted his press to a political cause: pressuring the Quaker-dominated Assembly to establish a militia for defense against marauding attacks on the frontier. A pamphlet which Benjamin Franklin published, "Plain Truth", showing the helplessness of the colony against the French and Indians, led to the organization of a volunteer militia, and funds were raised for arms by a lottery. Benjamin Franklin himself was elected colonel of the Philadelphia regiment. In spite of his militarism, Benjamin Franklin retained the position which he held as Clerk of the Assembly, though the majority of the members were Quakers opposed to war on principle. This was 17 years before James Smith and the Black Boys began to bring some order to the Conococheague.
Posted by JWRoss at 6:12 PM