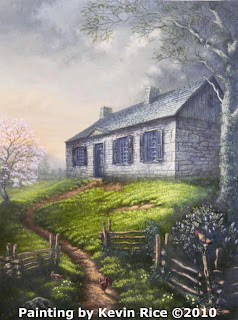 He has, as in his other works for the Conococheague Institute, once again transported the viewer to the Conococheague of the 1760's.  Using light, texture and fantasy elements, he transforms a 20th century dwelling into a form and place that James and William Smith would recognize.

Underneath a 20th century renovation, preservationists are finding a very old and very important house.  A house that is not only connected to the time of the Indian Wars (1750 to 1760) but, more importantly, to the stirrings of the American Revolution and the principles of the 2nd Amendment.

Speculation abounds as to what the now two-story Smith House looked like in 1765.  Kevin Rice gives us his vision.
Far from what is considered to be the "Birthplace of the American Revolution", (the greens and bridges of Boston), Rice recreates an unassuming structure that some scholars say was the true "manger" of the revolution.  Absent a brick 2nd floor and a multiplicity of overhanging porches (added in the early 1900's), a one and a half story stone house emerges.  Quarried from local stone the house has the classic finish and proportions of a traditional "Ulster" Irish house, typical of the 1700's.  In a cornerstone, facing south, Rice "carves" with his brush, the unmistakable "WS" for the owner, Justice William Smith.

Stone houses in the Conococheague in late 50's early 1760's were unusual, largely because they were costly to quarry and construct.  Those that did exist were places of business or homes of public officials and wealthy landowners.  Indeed, as late as 1798, only 7% of houses in Franklin County were stone.  Ninety percent were log and the rest divided between brick and frame.  Although Ulster architecture in the Conococheague was the most prevalent, vernacular variations were quite common.

Even though the first story of the Smith house is reasonably intact (including a great exposed chimney), because the original roof was removed, we can't be sure if the shingle roof was a typical steep pitched Ulster roof or a German influenced variation.  Regardless, the roof more than likely had "pents", or overhangs over the doors, and steps of wood or stone down from a raised threshold.

The artist captures each of these details and more.  He imbues the painting with the same spirit that all of his Conococheague paintings have.   Kevin Rice's work is infused with an energy, spirit, and intellect beyond his years.   Raised on a farm in the Conococheague, his paintings rely heavily on his intimate knowledge of nature's landscape, which enable him to create his dramatic and sometimes primitive worlds.   His depictions of nature often have a haunting visceral quality, where wind, trees, and light seem to take on a life of their own.   His bond with nature is self-evident.

A Final Note
This painting along with those he has done for the Conococheague Institute comprise the largest body of work covering early settlements in our area.   They give the viewer a profound insight into Pennsylvania life during the time of the French & Indian Wars.   Lovingly constructed and visually annotated with authentic scenes from the daily life of our pioneer ancestors, these paintings bring life to places lost to time, such as Welsh Run, Rock Hill Farm, Fort McDowell, Pawling's Tavern, and so many others in the greater Conococheague.

The worlds Kevin Rice creates are those of the shaman. Where "nothing is as it seems." This painting, "Justice William Smith House", is no exception.

"With their arrival announced by two hens and crowing roosters, viewers of Rice's painting make their way up a sunlit path which winds through a bucolic garden gate and to a deep set wooden door. The house, however, is surrounded in the shadow of a darkening sky and in the embrace of an almost leafless tree. Is the artist presenting to our eye and sensibility the present and future of this controversial house. Is it, what it is? or once again, has the artist proven that in this painting, as in his others, that nothing is as it seems! -- JW Ross

Prints
Prints of the "Justice Willaim Smith House" will be available in October of 2010. If you are interested leave your name and email address at "Contact Us".
Posted by JWRoss at 12:52 PM