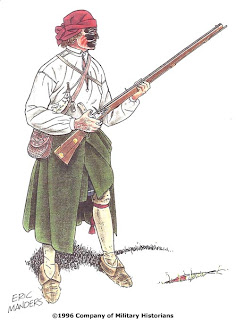 By Eric I. Manders

James Smith some 40 years after his captivity by the Indians, published his memoirs entitled, "An account of the remarkable occurrences in the life and travels of Col. James Smith during his captivity with the Indians :  in the years 1755 -59   ...editors note

Virtually everything known about James Smith’s company of rangers appears in a passage from the captain’s memoir:

"Sometime in May, this year (1763), I was married, and about that time the Indians again commenced hostilities, and were busily engaged in killing and scalping the frontier inhabitants in various parts of Pennsylvania. The whole Conococheague Valley, from the North to the South Mountain, had been almost entirely evacuated during Braddock’s war…As the people were now beginning to live at home again, they thought (it) hard to be driven away a second time, and were determined if possible, to make a stand: therefore they raised as much money by collections and subscriptions, as would pay for a company of rifle-men for several months. The subscribers met and elected a committee to manage the business. The committee appointed me captain of this company of rangers, and gave me the appointment of my subalterns. I chose two of the most active young men that I could find, who had also been long in captivity with the Indians. As we enlisted our men, we dressed them uniformly in the Indian manner, with breech-clout, leggings, moccasins and green shrouds which we wore in the same manner that the Indians do, and nearly as the Highlanders wear their plaids. In place of hats we wore red handkerchiefs, painted our faces red and black, like Indian warriors. I taught them the Indian discipline, as I knew of no other at that time, which would answer the purpose much better than British."[1]

Smith had spent most of the French and Indian War as a captive of a band of Caughnawaga hunters in the Ohio country, and was adopted into that tribe. He returned to his Conococheague Valley home after his release, and settled there in Cumberland County, Pennsylvania. It appears from his memoir that his ranger company was an extralegal unit, raised and supported by private subscription. It probably typified a number of units so raised on the Pennsylvania frontier during Pontiac’s War, unknown to the provincial government at Philadelphia and now lost to history expect perhaps through local tradition.[2]

Smith greatly admired the war-making abilities of Indians in general: “When they go into battle they are not loaded or encumbered with many clothes, as they commonly fight naked, save only breech-clout, leggings and moccasins…They are generally well equipped and exceeding expert and active in the use of arms.[3] He also describes himself, while a Caughnawaga hunter, wearing a belted blanket.[4] In reconstructing his rangers, however, we judged it likely that a shirt would have been worn to give some protection against such annoyances as deer flies and mosquitoes.[5]

For the most part, the prescribed items of dress were common enough to have been supplied by the men themselves. But the green “shrouds” present a problem. It is the author’s opinion that the word shrouds, as used by Smith and some contemporaries, is a dialectical variant of strouds - a coarse material used for making a variety of garments, but used also as a light blanket. Even a small company of, say, two dozen men would have required at least two “pieces” (20-24 yards each) of strouds to make enough blankets for all. One possible source was a local establishment run by Henry Pollens, who was peripherally involved in the Indian trade.[6] But, if so, the green color is puzzling. Indian customers had a strong preference for blue or red shrouds, and occasionally black for ceremonial use.[7] More probably, green was intended for the non-Indian market.[8]

Raising a company of riflemen must have been difficult at a time when the average frontiersman was too poor to own a firearm of any kind and a rifle would have represented a considerable investment.[9] Our ranger carries a family heirloom built earlier in the century. It is short, heavy, large-bored, and completely lacking the graceful lines that were to become characteristic of the Pennsylvania rifle.[10]

James Smith accepted a commission in the Pennsylvania regular forces in 1763, but his company continued without him until its expiration. The Conococheague Valley, which had been badly mauled during the French and Indian War, remained relatively unscathed during Pontiac’s War. It would be pleasant to report that the presence of Smith’s rangers accounted for the respite, but there is no evidence to warrant such a conclusion.

Epilogue…In March 1765, Smith and veterans of his company instigated a civil uprising to stop the flow of contraband trade goods – especially potential war material-from Pollens’s store-house to Fort Pitt.[11] They blackened their faces as a disguise and so were styled “Black Boys.” [12] In the process of disrupting the Indian trade they had a brisk fire fight with part of the British garrison of Fort Loudoun (the 42nd Royal Highlanders, no less) and subsequently laid siege to the fort itself.[13]

Thanks to COMPANY Fellows John Trussell, John Elting, Gary Zaboly and Peter Copeland for their unstinting help and advice. Thanks also to The Company of Military Historians. -- Eric I. Manders


[1] Pollens’s was a transfer point (near Greencastle, PA) where goods from Philadelphia were unloaded from wagons and warehoused until they could be reloaded on pack horses for the trek west to Fort Pitt. With the Indian trade currently suspended, Pollens would have been happy to sell any of the goods he had on hand.
[2] The Papers of Sir William Johnson (Albany: 1921), vol. 3, p.334. The preference for blue and red strouds remained constant in the course of two centuries of trading.
[3] For example, in the F&I War a portion of the Royal American Regiment wore leggings that were probably made from green strouds; test to MUIA Plate 74.
[4] The frontier guards raised in July were provided with arms, ammunition, accoutrements, and even blankets by the province; Penn. Archives, vol. 4, pp. 116-117, 120, 124. The “frontier” as a universally armed cultural entity did not develop until the first borderers crossed the Appalachian divide shortly before the American Revolution.
[5] An example of any early Pennsylvania rifle appears in Robert Held, The Age of Firearms (Northfield, IL: 1970), p. 144.
[6] They destroyed the cargo of one pack train and manhandled the drivers of another.
[7] There is no clear evidence that the name “Black Boys” generally smacked of outlawry and rowdyism: Paxton Boys, Green Mountain Boys, et al.
[8] Neil H. Swanson, The First Rebel (New York: 1937) – a colorful biography based largely on Smith’s memoir, but with a useful appendix on the Black Boys.
[9] An Account of the Remarkable Occurrences in the Life and Travels of Col. James Smith (Lexington, KY: 1799: facsimile edition, Ann Arbor: University Microfilms International, 1977),pp.59-60 (henceforth cited as Smith).
[10] Pennsylvania maintained no militia establishment in 1763, but in July the Assembly authorized a guard of 700 men for its five frontier counties, including Cumberland. However, this force was restricted to the passive defense of harvesters and was not intended to take any offensive action; Pennsylvania Archives (Philadelphia: 1853). Vol. 4, pp. 114-115, 116-117 (henceforth cited as Penn. Archives).
[11] Smith, p. 83.
[12] Smith, p. 48.
[13] Any “hunting shirt” of this period would still largely resemble the farmer’s smock from which it was derived. It is possible that some of Smith’s rangers wore this garment as well.
Posted by JWRoss at 3:38 PM