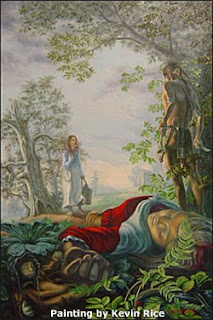 Although there were numerous incursions by the Indians in the late 1750's and early 1760's (in and around the settlement now know as Mercersburg), one that was particularly heinous was the Enoch Brown School House Massacre on July 26, 1764. Heinous because it involved the killing of 10 school children. This event signified the ever increasing need for residents on the frontier to protect themselves and led to the call for the formation of private militias like - James Smith and the Black Boys.  In the following account Glen Cump, Secretary Enoch Brown Park Association, explains some of the events leading up to this dreadful act. - - JW Ross

Between the years of 1664 to 1764, several hundred thousand emigrants came to America. Many of those sturdy German and Irish pioneers settled in the Cumberland Valley. However because of the civil unrest and Indian attacks, by August 14, 1763, 750 families had abandoned their homes in the county which, at that time, included the Juniata Valley.
The year of 1763 was the official end of the Seven Year War, the conflict that was known as the French and Indian War here in America. The war left deep scars in this country especially in the wooded areas here in Pennsylvania. The Treaty of Paris, by which France gave up her American Colonies, was signed on February 18, 1763; this news became known three months later to us in America. To our ancestors, it was not so much a formal end of an old war; but the undeclared beginning of a new war.

The Indians, in spite of their treaty with Penn, were becoming increasingly restless. After the defeat of Braddock in 1755, they began a series of outrages that did not fail to leave their mark upon the Antrim community (then know as Conococheague West).

Pontiac, the great chief of the Ottawas on the shores of Lake Michigan, became the champion of the spirit of hostility against the English. Having played a prominent role in the defeat of Braddock, he learned to despise and hate the English. He succeeded in marshalling all the Indian tribes between the Great Lakes and the Alleghenies. By 1762, prowling bands of Indians were killing and scalping pioneer settlers in Pennsylvania, Maryland, and Virginia.

The white man and Indian story isn't one sided. The grim irony was intensified by the fact that, just a few weeks before the Enoch Brown incident, Governor John Penn formally announced the promise of bounties to be paid to the white man for Indian scalps.

Violence begets violence. As early as 1763, a white gang, the Paxton Boys, murdered six Indians; and then a few days later, killed fourteen members of a peace-loving Indian settlement that for more than seventy years had lived at Conestoga near Lancaster.

An Indian husband and wife, by the first names of Michael and Mary, managed to escape the massacre by the Paxton Boys. Governor Penn, grandson of William, was asked to guarantee that they be able to still safely live in the area. But having recently promised bounties for Indian scalps, he procrastinated. The letter, expressing his appreciation of the peaceful Indians and guaranteeing safety to the couple, dated August 17, 1764, was written eight months after the massacre of the Indians.

The Enoch Brown massacre is not the first incident of savage brutality in this area. On July 26, 1756, two brothers, James and John McCullough were captured from their homestead near here. Again, on August 8, 1756, the Walter family incident occurred at their home in the meadow along Muddy Run near the site of the former Rankin's Mill. The father, Casper, was killed; the house was destroyed by fire and five children were captured. The youngest was killed a few miles from the site; the oldest, Rebecca, was scalped.

The day before the Enoch Brown massacre, Susan King Cunningham was brutally murdered near her home in the Marks area (not far from Mercersburg). Her daughter was the second wife of John McCullough, previously mentioned.

The first published news of the Indian warfare perpetrated here on July 26, 1764 was featured in the Pennsylvania Gazette published by Benjamin Franklin in Philadelphia in August of that year.

It was on the morning of July 26, 1764 when the foul murder of a teacher and his ten students occurred. Mr. Brown, a native of Virginia, was a man of liberal culture; he was noted and respected for his thoughtfulness, integrity, and Christian character.

Tradition says that on this morning the children were loath to go to school. Only eleven responded to the roll call, two girls and nine boys representing ten families. Archie McCullough, the youngest student, was the only survivor. After the Indians left, he crawled down hill to the spring where he was found. He lived to be quite old; but he was demented, a result of the scalping.

A passerby discovered the bodies a few hours after the murder. The children's bodies were removed to their respective homes; and a few days later their bodies, along with that of their teacher, were buried in one grave.

Due to the fact that the grave was not marked and that some of the families moved from the area, the incident was forgotten to a degree, some contending the story was a legend. There was, however, one who knew the facts and repeated the story to others which prompted an investigation.

Mrs. Betty Hopkins lived in a log cabin half a mile from the school house. Because her windows were boarded up, the Indians who stopped by that day were led to believe that there was no one home and passed on. General David Detrich learned to know Mrs. Hopkins when he was a little boy; and after an intimate acquaintance of twenty years, he buried Mrs. Hopkins who died at the age of 104 years. His father who lived one mile north of this site often heard her repeat the story about the "terrible tragedy".

From an address presented on August 1, 1992 at the Enoch Brown Park on the opening day of Old Home Week. Thanks to the Allison-Antrim Historical Society for this information.
Posted by JWRoss at 6:58 PM