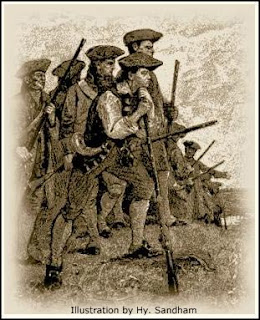 I'm not sure why we do not do a better job of reading and understanding our history. Those who favor more restrictive legislation regulating gun ownership continue to emphasize that the Second Amendment is a collective right not an individual one. That would be interesting considering that the rest of our Bill of Rights is about individual rights as is the history of how this came to be part of our Constitution.

The main problem with the collective right argument is that it ignores the fact that after the Revolution the Economic and Political elites started taking away the very rights they had enjoyed as Englishmen in fomenting rebellion in the first place. As Terry Bouton points out in Taming Democracy for these Elites the enemy was democracy itself so they used the U.S. Constitution to undo it. These Arrogant Elites in American society were coming to believe that there was too much rising power in those who were inferior. The government must be put back in the hands of the better sort of men.

While Bouton equates this souring of the Economic and Political Elites with a wide set of issues such as problems financing the war and the indiscriminate printing of money plus a fear of the social upheaval that the American Revolution had caused, the reason for pulling back the potential power of the Middle Class is simple. The Elites had no intention of losing power or having the Middle Class rise up against them the way the Middle Class had risen up against the British. They had a reason for their apprehension because there were 21 rebellions from the founding of Jamestown in 1607 to the American Revolution.

If I had the time I would argue on these pages that the Elites first of all were not the prime movers for Rebellion and Revolution they had hoped that change could be brought about peacefully and as Bouton showed in Taming Democracy they hoped to use peaceful boycotts to achieve their ends and to remain in the British Empire in the beginning. In all likelihood they were not even in the leadership of the movement that becomes the American Revolution. They joined the fray reluctantly and only when they saw that this was the only way they could remain leaders. When it was all over they wanted to make sure it could never happen again.

This argument over individual or communal rights to bear arms can be seen for what it was, a class based argument. The ordinary Middle Class person believed in their individual right to bear arms. The Elites were fearful of an armed Middle Class population because arms are the tools of rebellion. Locke's Second Treatise on Government was still widely read and in case of tyranny it stated the people have the moral obligation to revolt when government fails to defend the rights of Life, Liberty, and Property. To make sure that never happens and that the Elites controlled the power you make the right to bear arms a communal right of the state to create militia's taking away the revolutionary individual right to bear arms.
Posted by JWRoss at 9:37 PM