The Gun that Started the Revolution


In 2009 the Pennsylvania House of Representatives signed a resolution recognizing the significance of the Pennsylvania-made long rifle, to the history of industry and fine art in America. 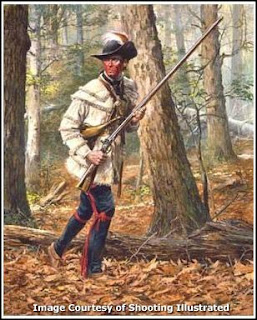 The "Official Firearm of the Commonwealth of Pennsylvania", the long rifle, was the gun of choice of James Smith and the Black Boys. Vastly superior to the arms of the British infantry, usually a musket, the long rifle in the hands of experienced woodsmen was deadly to traditional British fighting formations. Accurate to between 200 and 300 yards, the long rifle was sleek, light, and reliable, making it the ideal weapon to use for hunting and in fighting irregular warfare. Frontiersmen learned their "trade" from the Indians who quickly figured out that "hit and run" attacks were more effective than frontal assaults.
With its origins in southeastern Pennsylvania, and a product of several influences, the Pennsylvania Rifle owes its existence primarily to immigrant gunsmiths in Lancaster County. Lancaster became the rifle capital of the young nation due to geography and geology. Lancaster was an important crossroads trading post between urban Philadelphia and the western wilderness. As settlers moved west, they needed reliable firearms. Lancaster County had the necessary natural resources to support gunmaking: the largest iron ore deposits in the colonies and forests of quality hardwoods to produce stocks.

The earliest colonists primarily used smoothbore muskets and fowling pieces to hunt, fight, and defend their homes. But by the early 1700s, German and Swiss gunsmiths had brought rifle-making skills with them to Pennsylvania. What made the rifle a superior firearm was a series of twisting grooves on the inside of the barrel that imparted spin to the bullet stabilizing its flight. As a result, rifles provided greater accuracy at longer range.

The "jaeger" or "hunter" rifles that German and Swiss immigrants brought with them were quite different from what became the Pennsylvania Rifle. They were shorter, heavier, "club-like" devices with a barrel diameter of about six tenths of an inch, and were almost as impractical frontier weapons as the longer, heavier, less accurate smoothbore muskets of the time.

Riflemen played an important role in the French and Indian War and the American Revolution, wars characterized by irregular combat in woodland battlefields. By the eve of the latter conflict, several patriot leaders believed that American woodsmen armed with Pennsylvania Rifles could easily defeat stodgy, musket-wielding redcoats. In 1775 George Washington recruited rifle companies as the core of his new Continental Army.

The Pennsylvania Rifle Regiment and units from southern colonies answered the call. Clad in buckskin and with varying equipment, the riflemen shared a strong esprit de corps. Yet, poor planning, tactics, and logistics kept riflemen from providing the decisive blow that Washington sought. Riflemen could provide deadly firepower while under cover or selectively shoot enemy officers, as they did at Saratoga and Hannah's Cowpens. But in the end the riflemen could not withstand overwhelming British infantry assaults, as the long rifle took too long to load, which meant that in close engagements the British had the advantage in rate-of-fire. In addition, long rifles were not fitted with bayonets.

These problems, when compounded with the overall lack of discipline among rifle units, led Washington to refit his forces with more traditional muskets. Before becoming outmoded, the Pennsylvania Long Rifle again served its country in the War of 1812. Instrumental in the spectacular defeat of the British in the Battle of New Orleans, the war's most legendary battle, the rifle played its final role.